This is the inferno that I was facing as I drove down my driveway and began my evacuation out of Hidden Valley Lake.  Of course I had to pause to get one final photo of the fire. 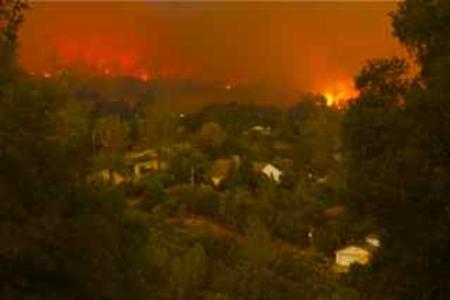 It is human nature to be captivated by fires and volcanoes. Watching a fire from the distance is one thing but finding yourself surrounded by a fire is another story.   After the "Rocky Fire" and "Jerusalem"  fires were finally contained my "sigh of relief" was short lived.

Little did I know what was to lie ahead on that fateful day of September 12th. A new fire had started at Cobb Mountain which is over 12 miles southwest of Hidden Valley Lake. But as the plume got closer and the sky changed color I decided to get out an take some photos. I pretended to be a photo journalist for the day and went to Cobb Mountain to get as close to the fire as I could.  As I looked up at the fast moving red fire I didn't exactly have time to break out my tripod to take the few seconds of video that I managed to get.  The sound from the fire was overwhelming and it was time to "get out of there".  I have done a lot of stupid things in my life but that one pretty much tops them all.

Driving back to Hidden Valley Lake there was a really eerie feeling as part of the sky turned totally black from the smoke from the fire.  By the time I got to my house a mandatory evacuation had been called.  I ran inside and knew that I had to pull myself together.  Rule number 1: Don't panic! I took a deep breath and told myself that I would give myself a total of 5 minutes to get what I needed and leave.

First I hooked up my yellow labradors, Bentley and Bailey and put them in my car.  I ran back inside and unhooked my main large computer and put it in the trunk of my car.  Finally grabbed a box of important papers, cell phone, and camera and I headed out.  The fire had reached Hidden Valley Lake and all hell broke loose!  Traffic was "gridlocked" and the fire was not very far behind and was coming up on both sides of highway 29.  Bentley and Bailey helped keep me calm as they nuzzled and licked my neck as if to say "it's okay ,mom,  you will get us out alive".  I promised them that I would get rid of my 23 year old broken down car with over 200,000 miles on it and get us a safe car if we got out alive.